You are here: Home / My Life / Build A Bear Giveaway 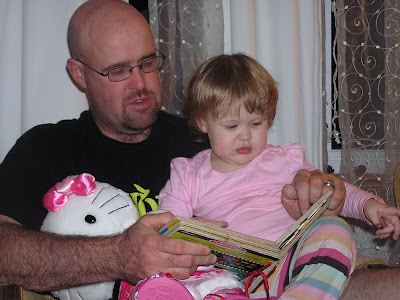 This post was edited on 12/20 to reflect a change in the contest. You can enter the contest with a post on any stuffed animal. It doesn’t have to be a dirty, worn out, or gross one.

Did you have a favorite stuffed animal when you were a child? I probably did, but I don’t remember it. Actually, I sort of remember a Pumpkin Patch kid that I had with curly red hair. She had a really round face, like me, and she was cute. I liked her a lot; I wonder where she is now.

Grace doesn’t really have one favorite stuffed animal, either. Sometimes, she favors Barney. Sometimes, she loves her Baby. Sometimes, it’s her Build-A-Bear rabbit that my sister and niece gave her last year for Christmas. Not having one favorite means that they are all staying relatively nice. None of the animals really even looks used. 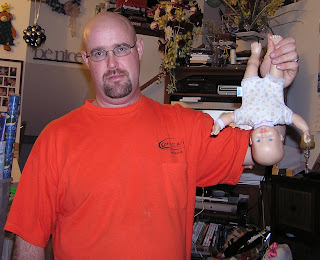 That’s a total lie. The Baby is so filthy that I have considered throwing her in the washing machine. It’s partly because we took her to the beach with us. Apparently, the beach is a dirty place.

A couple weeks ago, Build-A-Bear Workshop sent Grace a Hello Kitty stuffed animal.When the box arrived, Grace said, “Mine?” like she knew what was inside. She supervised while I cut the tape and opened the box.

As soon as I opened the first box flap, I was concerned. The Hello Kitty was almost as big as my child, and I feared she’d be afraid of it.

But then she started squealing a squeal so loud and high pitched that our windows fell out into the yard. Not really, Dear Reader, but it was loud and shrill.

And overwhelmed with delight. 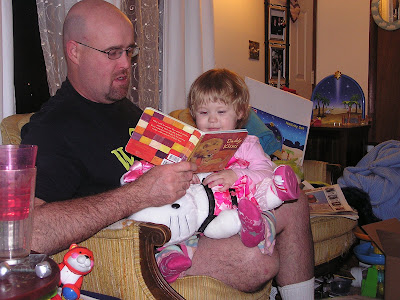 They’re best friends now, Grace and the Kitty. They share everything, even their cutest shoes.

What’s better is that I like the Hello Kitty. I think she’s cute, and I love that Build-A-Bear made her. That name tells me that she’s well made from high quality materials.

Guess what! Build-A-Bear gave me a $25 gift card to give to one of you! Do you know someone who would love a little post-Christmas Build-A-Bear to cuddle with? 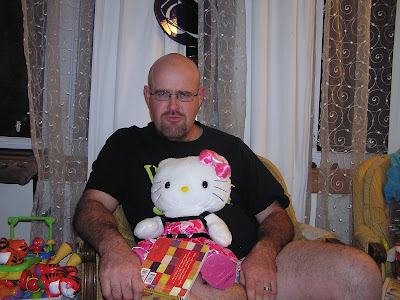 This is going to be a little different from the giveaways I’ve done in the past, so pay close attention. To enter, you have to post a photo of your favorite, most loved stuffed animal. It can be yours, your child’s, or your spouse’s, just find one that has survived a lot of snuggles.

Since Joe doesn’t know any of my Dear Readers, I’ll make him pick his “favorite” animal. He’ll be delighted to help out. Can you tell how excited he is?

So here’s what to do:

You can get one extra entry for the contest for each of the following (but ONLY after you’ve done the above):

Good luck! Joe will chose a winner sometime on December 28, so enter by 9 a.m. EST.