You are here: Home / My Life / The incredible shrinking bed

Until a few years ago, I was sleeping in the same twin bed I’d been sleeping in since age five.Ã‚

My sister and I had bunk beds that we broke by jumping together on the top bunk, and our parents got us a new, sturdier set. The new set proved to be incredibly durable. In fact, when we moved to a new house with separate bedrooms, my parents put the two halves of the bed into our different rooms, and we slept on our single bunks for twenty years.
Actually, my sister still sleeps on hers and mine is in the guest room upstairs.
Back to the point. Shortly after I bought my house, I became the proud parent of four cats. Two of said cats were quite large, and all four of them liked to cuddle with me at night. My twin bed was no longer big enough for us, soÃ‚ I bought a magnificent queen-sized bed, outfitted with luxurious 400-thread-count sheets.Ã‚
It’s been lovely, and I’ve never thought it was tooÃ‚
small. Cats, husband, pregnancy, over-sized noodle pregnant belly pillow… We’ve always had just enough space. 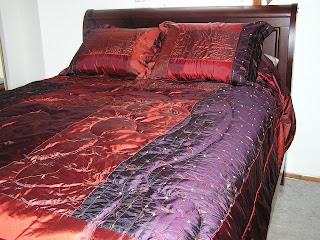 Until recently.
It’s very strange, actually. I have plenty of space when I get in bed at night. It’s not untilÃ‚ sometime between midnight and one in the morning Ã‚ thatÃ‚ my bed mysteriously gets narrower. When it happens, I get smooshed into the far left corner with my legs hanging over the footboard.Ã‚
It’s a strange phenomena, the shrinking. It starts when the teething baby wakes me up, needing to be cuddled. I go to her room to get her, and I think that’s when the shrinkage begins. Ã‚ I don’t want to sit, awake, in the rocking chair for an hour, so I bring her back to the bedroom with me to cuddle in my bed.Ã‚
By the time we make the long walk from her room to mine, the cats have arrived, looking for the whimpering baby.Ã‚
All of a sudden, my husband and I (who were sleeping soundly just a few moments ago) are joined by one squirmy toddler, two very large and affectionate cats, and two slightly smaller but equally affectionate cats. Ã‚ Add a couple of pillows and blankets to the mix, and there’s no space.
Except on the floor next to the bed, and maybe on the couch, but who wants to leave the family bed?
What do you do when your kids cry in the night?
To solve other people’s dilemmas, visit Rocks in My Dryer for Backwards Works for Me Wednesday