You are here: Home / Homepages / I feel like one of the cool kids!

I’ve received three blogging awards recently. How about that? A year goes by, nothing. All of a sudden, three awards from the blogosphere. I feel like one of the cool kids at the party.

It’s really an honor to have blogging friends who think you’re cool. My friend Lisa, from Blessed with Grace, gave me the BFF Award. The rules for this award are
I don’t want to downplay the coolness of getting an award from my friend. It’s really great and fun, and it has never happened to me before.
I am giving the BFF Award to
An even bigger honor, to me, was the second award. It’s called The I Heart Your Blog Award. For this award, you’re supposed to nominate seven blogs that you love. I was nominated by Heather at Finding Me in the Madness. 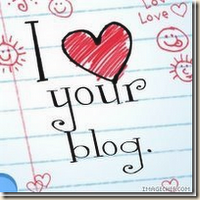 That’s not the part that really touched me because, naturally, Dear Reader, people love me, and they love my blog.
The part that touched me was that I got this award from a person I’ve never had a conversation with. She put my blog on her list, and we aren’t friends yet. We will be soon.
Wow! Heather said some really nice things about me. Things so nice that I probably don’t deserve them.
Thanks, Heather. You really made my day!
I am passing the I Heart Your Blog award on to:
Would you believe that I had all but finished this post, and Mindy gave me a third award? I decided to do some editing to the original post and add her award rather than starting over. I had no idea that Mindy read my blog on a regular basis. I adore her blog, and I am honored that she thought of me for the Brilliante Weblog Award. Yeah!

The rules for this one are as follows:
I’m giving this award to some women that I think are brilliant. They are all very successful, and they’re working really hard at what they do. They are:
Phew! This took a lot longer than I expected, but I wanted to spread around some linky love.
PS. I hope you’ll play along, but I totally understand if you don’t. In either case, post your award and let others know that I think you rock.