I found out that I was pregnant on a Sunday. Joe and I agreed not to tell anyone. He thought it would be a wonderful secret for us to share, just the two of us.Ã‚

It might have been a wonderful secret, if I was capable of keeping a secret. Which I’m not.

Of course, I swore all of my closest friends and family to secrecy when I told them. Don’t tell Joe that you know!Ã‚ I said.

It’s a disease. I think they call it can’t-keep-my-mouth-shut-itis.
That’s really got nothing to do with anything. I just thought I’d share.
Anyway, we found out that I was pregnant on a Sunday towards the end of September. The following Saturday was the local apple festival, and we always go.Ã‚
Joe and I walked on air past booths peddling apple snacks, apple crafts, and wooden apples, when we both spotted – at the same time – a stand selling baby blankets.Ã‚
I was almost four weeks pregnant, Dear Reader, so we really needed a blanket for the baby to sleep with at night.
We bought one, a cute one. It was red fleece on one side and Winnie the Pooh and Tigger on the other side, and it had ribbon tags all around the edges. It was wonderful and over priced, so we bought it.
Fast forward nine ten months down the road to Grace’s birth. I had long forgotten the blanket, so it’s not in any of the hospital pictures.
I rediscovered the blanket when Grace was about two months old. She couldn’t care less.Ã‚ For some weeks, I stuffed the blanket into her chubby little fingers several times a day. I don’t think she noticed. Or cared. Let’s assume she didn’t notice.
Lather, rinse, repeat. The same thing happened when Grace was six months old. And then it happened again when she was ten months old.
Disheartened, I put the blanket in a box of stuffed animals in the living room. She didn’t care about them, either. 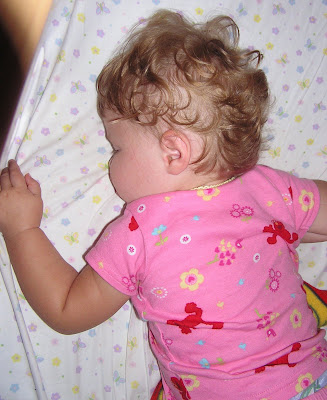 I had forgotten the blanket, again. It sat hidden amongst some Mushabellies, until Grace discovered it a few weeks ago. She knew instantly what it was.
“Buh!” she squealedÃ‚ (obviously toddler speak for blanket, Dear Reader). “Buh!”Ã‚ Ã‚
Since then, Grace and herÃ‚ buhÃ‚ have been inseparable. They go everywhere together.Ã‚
Grace and buh go to breakfast with Grandma and Grandpap. Grace and buh go to school. Grace and buh eat dinner, and Grace and buh ride in the car.Ã‚
And, of course, Grace and buh sleep together at night. Ã‚ Do you see it, Dear Reader, way down in the right corner, under her?