Have you ever been to the beach?

I’m betting that the majority of Americans haven’t. I’m betting that because I hadn’t until yesterday, and I like to think that I’m like most people.
Most of the people where I live have been to the beach. Everyone but me, actually. I took a scientific survey.
We’re not far from the beaches in New Jersey, Maryland, and Delaware, and it’s like a sacrilege that I’ve never made the trek. When I mention that fact, they think I’m strange.
I am strange, but it doesn’t have anything to do with the beach.
So, my husband and I packed up our little family and drove to Rehoboth, Delaware. His family has vacationed at Rehoboth almost every year of his life, so he was really looking forward to bringing Gracie “down the shore.”
We arrived in town, settled in to our rented condo, and went down to the ocean. 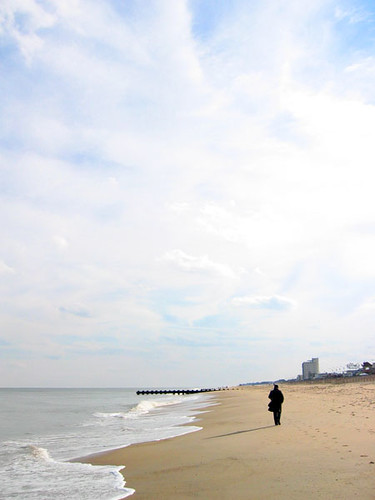 I wanted to swim, so the three of us went down to the water’s edge. Where the crashing waves knocked me down and dragged me over the rocks like cheese on a grater. Until my knees and elbows were scraped and bloody. Three times.
Oh, yeah, I see how fun the beach is.
My husband told me that I was doing it wrong. You don’t say, Dear.
We took the baby back up to play in the sand. The sand was soft and smooth and nice to sit on, until I realized that I had six pounds of it between my butt cheeks and my bathing suit.
Oh yeah, I see how fun the beach is. And the fun was just beginning.
Joe explained that I had to get past where the waves were crashing. He claimed that I’d be able to “ride” the waves if I went out far enough, and that the bottom would be smooth and sandy again.
I hate to admit it, but Joe was right. After his pep talk, I went back down to the water’s edge, moved hastily through the crash zone, and stopped where the water was up to my shoulders.
Have I mentioned that the water was about 69 blessed degrees? The pool that I swim in, at my friend Joanne’s house, is usually about 86 degrees. That’s a big difference, Friends. I was not prepared for that kind of cold water in the middle of August.
Come on now, I’m an earth science teacher. Why was I surprised by the water temperature? It wasn’t so bad after a few minutes. I think that’s how long it took for the outer layers of skin get numb and insulate my body.
There I was, past the crash zone, waving to my family, and jumping into the waves. I was having fun. At the beach. I was still having fun when the wave came along that was so big it knocked me off my feet and back on to the sharp rocks at the crash zone. I checked to see if my sunglasses were still on my face (they were), and moved as quickly as I could back toward my original spot.
Dear Friends, I have a plethora of stories to tell you from my first trip down to the beach, but they are too big for this space. I’m going to write each one in its own post. Coming soon – my first post-beach shower and gathering sea shells in the surf.